How Molly Brazil decided what kind of doctor to become! 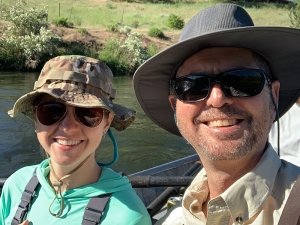 As my third year of medical school came to a close, I found myself mere months away from applying to residency, entirely unsure of what kind of doctor I wanted to be when I grew up. Some people enter medical school knowing exactly what their intended specialty is and never waiver. However, the majority of us are forced to make this huge life decision based on very little experience.

I remember being told over and over that I “had plenty of time to figure it out” as different attending doctors asked me what specialty I planned to pursue. However, we are only in clinical rotations for about a year before we have to decide what to specialize in so that we can build our applications. For the more competitive specialties (dermatology, orthopedic surgery, etc.), you have to know even earlier so you can publish scientific papers, present at conferences, and apply for rotations at other medical schools around the country.

You can quickly do the math and realize that there are nowhere near enough weeks to experience every specialty. On top of that, each rotation is two or four weeks long, which is barely long enough to figure out what you are even supposed to be doing. So when it comes time to make a decision, many students, myself included, feel they are making one of the biggest decisions of their life without enough information (a scientist’s worst nightmare).

It is also important to point out that for most of us, this is the first time in our lives that we have to make a seemingly irreversible decision. Choosing an undergrad seemed monumental, and then choosing a medical school topped that, but with both the end result was the same: a degree that would get us to the next step. Choosing a medical specialty isn’t just another step though, it is THE step. To change medical specialties, while doable, is not an easy process and often adds at least a year to your training, depending on how early you realize it is not the right fit.

So, faced with this decision, I chose the seemingly logical option of applying to two different specialties. I wrote personal statements for both, asked for letters of recommendation from attending doctors in both specialties, and made sure I had submitted abstracts/papers on topics in both fields.

I also did rotations in both anesthesiology and dermatology. This gave me more exposure to the two fields, as well as what life was like in New Orleans, Louisiana and Birmingham, Alabama. Spoiler: it was very different from life in the Pacific Northwest (PNW). Unfortunately, I loved both rotations, confirming my decision to dual apply and providing me no help in choosing between the two.

I thought maybe the interviews would be enlightening and I would glean more about the fields and the programs available to me, but alas, I chose the two specialties for a reason. I got along great with the people and we had a lot of interests in common. Residency interview season is a very unique opportunity. Although expensive, it is still a privilege to be able to see so much of the country and meet so many different people. For both dermatology and anesthesiology, you also have to apply for a separate intern year, meaning I was interviewing for three different types of programs. I limited my programs to the West Coast and Southeast due to family connections in these areas, but even then I was flying all over the country between October and January, sometimes with four interviews in three different states in two different types of programs in one week.

Ultimately, I left it to the Match algorithm to help me decide. The Match algorithm was originally designed using game theory for matchmaking. In 2012, the algorithm was the basis for awarding the Nobel Prize for Economic Sciences to its creators. The basics of the algorithm is that the applicant ranks every program interview in order of preference. As well, programs around the country rank the applicants they interviewed by their order of preference. In a matter of seconds the algorithm compares all of the lists from applicants and programs and generates each programs’ intern class. If a program and applicant both rank each other #1, then that is a perfect match. Somehow, every year, the majority of applicants are matched into one of their top 3 programs.

I was lucky enough to be matched in my top 3 and will be starting my anesthesiology residency at Vanderbilt University Medical Center in Nashville, Tennessee this July! It will be my first time in 27 years that I’ll live outside of the PNW and more than one state away from my parents (and dogs). I will, however, be 2300 miles closer to my boyfriend, an active duty Air Force pilot based in the Florida panhandle. While I have to say a temporary goodbye to the Pacific Ocean and Cascade Mountains, I am excited to fill my few hours of free time with Southern cooking and live music.

I may be a Commodore now but I will be a Husky forever. Go dawgs! (sorry, dad).