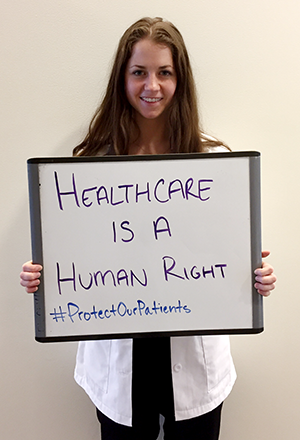 For the doctor (or student doctor)-patient relationship to be successful, it requires the doctor to build trust so that the patient is comfortable enough to be vulnerable. In order to make the correct diagnosis and start proper treatment, we need to know things that we don’t often talk about publicly in our society. We ask personal questions ranging from hobbies and relationships to sex and drugs. We perform intimate exams that would be considered assault in any other setting. It only works because the relationship is built on trust. If we have done our job right, then our patients feel cared for and respected.

Psychiatry takes that vulnerability to a level I was wholly unprepared for. I did my rotation in Klamath Falls, Oregon. A rural community known for being in a beautiful area near Crater Lake, but unfortunately it is also known for its poverty and high rates of meth addiction. There is only one psychiatrist for the entire county of 60,000 people, and many of the patients I saw experienced trauma to a degree I still am unable to comprehend. Taking histories was an exercise in my own emotional control; the stories my patients told me were almost too painful for me to hear. I listened as they recounted horrific abuse and other tremendous struggles I have been fortunate enough to never experience.

During the rotation, I visited the local jail to do suicide risk assessments, I went to a group home to evaluate a man who was scaring other residents with his aggression, I saw a patient in the ER after a suicide attempt, and I talked with patients in the psychiatric hold facility who were so floridly psychotic that there was no way to have a reasonable conversation with them. Helping these patients often required asking questions I have never asked another person in my life, and I found it surprising how trusting my patients were of me. I asked about legal issues, childhood sexual abuse and domestic violence, among many other “taboo” subjects.

In my preclinical years, I found the psychiatric portion of the curriculum fascinating. From a purely intellectual perspective, psychiatry is amazing. You learn about how childhood trauma is associated with increased rates of chronic diseases such as heart disease and diabetes. How an imbalance in chemicals in your brain causes severe depression or mania or florid psychosis. You learn about nihilistic delusions, where people believe they are missing body parts, and Capgras syndrome, where they believe a loved one is an imposter. The classic example being a man who believes his wife is actually an alien who is pretending to be his wife. I remember learning about personality disorders and what causes people to have such maladaptive behavioral patterns. The field poses incredible and fascinating situations to think through and treat.

However, in practice, psychiatry is a whole different experience. You see first-hand the struggles these people live with on a daily basis. Capgras is fascinating until someone is begging you to help them because they believe their uncle is a terrorist, when in fact he is actually the only person left in their family willing to take care of them. Nihilistic delusions are an intriguing concept until you tell your patient to take a deep breath in an attempt to help them relax, but they look at you with shear panic and say “I can’t because I don’t have any lungs.” Even when you know it is the best decision for a patient, their family and the community, putting a patient on an involuntary psychiatric hold feels awful. These patients are often so delusional or out of touch with reality that they cannot understand why you are keeping them in a cold, sterile room against their will. I’m not sure I’ve ever felt worse than when I walked out of the hold room, leaving a confused young woman pleading for us to let her go home to her children.

Even in the clinic where most of what I saw was major depressive disorder and PTSD, the appointments were so difficult for me to get through because patients told me these deeply personal struggles that I could not fix for them. And wrapped up in every encounter was my guilt about how much I was struggling when I knew the patients were struggling with much more.

I found my psych rotation to be an invaluable experience in which I learned a lot about having difficult conversations and managing my own well-being as a healthcare provider. While I talked to patients about coping skills, I also had to work on developing my own. Additionally, my own discomfort forced me to reflect on the patient experience and what it must have been like for them.

As I have mentioned many times in the past, medical school is humbling. There is something about the rawness of psychiatry, however, that instills a whole different sense of humility. I saw, simultaneously, the fragility and strength of my patients. I was privileged to discuss the intimate details of people’s lives that ultimately led to them walking through the door of the clinic.

We are now offering telemedicine appointments for your dermatology needs. All you need is a smartphone or a computer/tablet with video capabilities.

Wherever you are, we’re here to help.